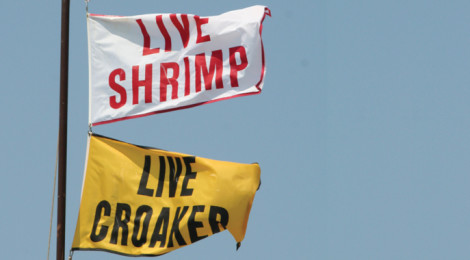 Lures are good a whole lot of the time along the Texas coast, but when it comes down to catching trout, reds and flounder it’s tough to beat live baits on a daily basis. There is absolutely nothing better than having a red or trout blow up on a topwater lure. And feeling that solid thump on a jig at the end your line and reeling in a fat flounder is the cat’s meow. But it’s a fact that on many days, especially when you are just trying to put fish in the boat, a live shrimp, mullet, mud minnow or croaker is the way to go.
Live shrimp rule when targeting trout and reds. You can fish them on bottom, under a float, free-line them and even tip a jig head with them.
Seeing a live shrimp flag flying is one of the best sites you’ll see along the coast. It’s a sure fire sign that you’ll be able to load up on shrimp – just don’t forget your wallet. You can buy them by the pint or by the quart, and the cost might surprise you. A quart of shrimp can easily set you back $20. And if you don’t have a good live well chances are good they will all die. The key is to provide them with an oxygen rich live well, and not let the water over heat.
Croakers are always a good option for trout. In fact they are so good that many anglers think they should be outlawed for use as bait. It’s not unusual to see stickers on boats indicating no croaker soakers allowed. It’s certainly true that a three to four inch long croaker will catch trout – big trout. Like shrimp, you’ll need a good live well to keep them alive.
Conversely, finger mullet and mud minnows are pretty tough. They don’t need a full blown live well. A five gallon bucket with an occasional change of water will keep them swimming, but a little infused oxygen is always good.

← Swine Tingling Close Encounters
From the Back Deck →