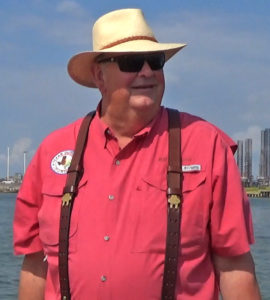 Bill L. Olson is a third generation Texan and native Houstonian who has hunted and fished over much of the western half of the North American continent, from Mexico to Canada’s Northwest Territories.  He is the Founder and Publisher/Editor of Texas Outdoors Journal.  In 1996, 1999, 2001-2019 Texas Outdoors Journal was named one of Texas’ Top outdoor publications in the annual competition amongst other Texas titled magazines held by the Texas Outdoor Writers Association.  On February 27, 2021 Texas Outdoors Journal was once again recognized in T.O.W.A.’s Excellence In Craft competition when it was recognized in the highly competitive Outdoor Magazine category.  This marks the 23rd consecutive year TOJ has been honored.  No other Texas titled outdoor magazine can claim a similar period of sustained excellence. (www.texasoutdoorsjournal.com)

Olson is an avid big game hunter with numerous elk, mule deer, white-tailed deer, antelope, bear, moose, turkey and various predators to his credit.  In 1994 he successfully spotted, tracked and harvested a huge Shiras moose in Colorado that made the prestigious All Time Boone & Crocket Big Game Record Book.  At the time of harvest it was the third largest moose ever taken in Colorado.

He is also an avid saltwater angler and licensed U. S. Coast Guard Master Captain with a 100 Ton and Towing Endorsements.  Growing up near the Texas coast, he spent considerable time honing his skills wading and drift fishing the entire coast for “Texas’ Big Three” – speckled trout, redfish and flounder.  He pursues big game fish in the Gulf of Mexico, Atlantic, Pacific and Caribbean Oceans.

In March 2006 he joined the TV broadcast team on FOX Sports Outdoors – Southwest.  Each week for 39 weeks Olson’s “On the Coast” updates viewers as to where the hottest action is occurring, both inshore and offshore, along Texas’ Gulf Coast.  He completed his 14th season in 2018.

Olson is a staunch supporter of many conservation groups.  From 1989-1995 he served on the Rocky Mountain Elk Foundation National Board of Directors during that non-profit’s early formative years.  Utilizing his extensive real estate and marketing background, Olson headed the Lands & Conservation Committee where he played an instrumental role in many of the habitat acquisitions during his term.  He and his late wife, Ann, founded and chaired the Houston RMEF Chapter 1988-1992.  This chapter has perennially been one of the top fundraisers in all of North America for RMEF.  At its 2012 Silver Anniversary Big Game Banquet Houston became one of the first 10 RMEF Chapters, out of 550 nationally, to surpass two million net dollars raised for elk and other wildlife.  Houston surpassed three million net dollars raided in 2018.

In March 2009, at the Rocky Mountain Elk Foundation’s Silver Anniversary 25th Annual Elk Camp and Expo in Fort Worth, Olson was once again elected to serve on the RMEF National Board.  He completed his most recent term in February 2012.  Today RMEF boasts over 230,000 members.

In March 1995, Olson received a State appointment to the Board for “Texas’ Operation Game Thief” from Texas Parks & Wildlife Executive Director, Andrew Sansom.  During his six years term he was responsible for increasing public awareness of this anti-poaching organization by both consumptive and non-consumptive users of the outdoors.

Throughout each year he presents numerous seminars on a variety of hunting and fishing activities as well as conservation topics.  He also serves as the MC at a number of outdoor shows and fundraising events plus does voice-over work for several companies.