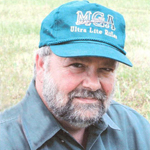 Kerry O’Day started shooting competitively with a handgun and shotgun in the late 1970’s and early 1980’s. He began a custom gunsmithing and handloading business, MG Arms, in 1981 to support his habit of “shooting and hunting too much.”

“I have always said that gun powder has taken me around the world,” he stated. “I have been lucky enough to have hunted 5 continents and to have taken more than 60 different trophy animals.”

An avid handgun hunter, O’Day has shot most of his African animals with a 500 Linebaugh revolver; this includes the #2 Cape buffalo and the #1 Springbuck. He has harvested more than 10 animals that are in the top 10 of the Safari Club International Record Book.

His wife, Carol, and both of their children are all avid hunters