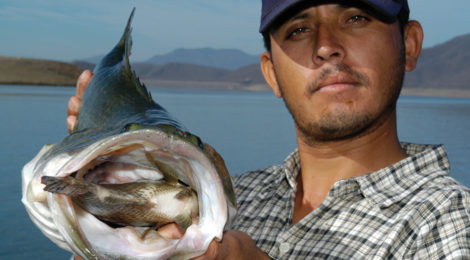 The quest in Texas for oversized, trophy largemouths begins in earnest this month.
Story and Photography by Matt Williams

It’s January in Texas, and time for all you bass busters out there to bundle up and get those game faces on. True. Texas has proven itself as a state for all seasons where catching bass is concerned. But if you are truly serious about reeling in a big girl with a serious weight problem the time is ripe to get it done.
The biggest bass — those weighing upwards of eight pounds — are always females. It’s nature’s way for their ovaries to develop and fill with eggs during late fall and winter. By the time spring spawning season rolls around some females may appear so obese that it looks as if they just swallowed a softball.
The fattest looking fish I have ever seen was Scotty Deaton’s former lake record from Lake Falcon. The fish weighed 15.12 pounds when it was caught in May 1991, reportedly while fishing from the shoreline. Pictures of Deaton’s catch make the 24-inch fish look badly deformed, mainly because it appears to be as big around the belly as it was long.
Fisheries scientists have told me that a mature female bass might weigh as much as 10 percent heavier when it is full of eggs as opposed to when it is not. That means a healthy bass that weighs 10 pounds during the heat of summer could easily weigh 11 pounds come January, possibly more if it happens to gobble up a big crappie, perch or tilapia right before it gets caught.
The latter does happen on occasion.