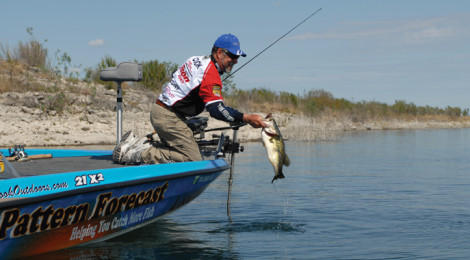 Bass are rough customers, but they aren’t near as tough as they might look. This holds especially true of heavyweight fish weighing upwards of 7-8 pounds.
Think of big fish as the old folks of the freshwater world. They can take some abuse, but not near as much as younger, smaller fish can. Stick one in a livewell that isn’t functioning properly or hold one out of the water too long taking pictures and you could wind up with piscatorial corpse on your hands in short order, or become the catalyst for another case of “delayed mortality.”
Delayed mortality the term used to describe what happens when a fish goes belly up after being caught. It can happen as quickly as few hours or as long as a few days or a couple of weeks after the fish is released.
Fisheries scientists have learned that several factors can potentially lead to delayed mortality in bass. Excessive blood loss from deep hooking or gill damage is always a possibility.
Another is barotrauma — a scientific term for an overinflated air bladder. It often occurs in fish that are reeled in quickly from deep water.
A bass’ air bladder gradually deflates as it swims shallow and inflates when it goes deep. This allows the fish to maintain neutral buoyancy as it changes depths.
A fish caught from deep water that is released immediately can usually regain neutral buoyancy on its own. Conversely, a deep caught fish that is placed in a livewell may exhaust itself trying to adjust. In severe cases, barotrauma will leave an exhausted fish floating on the surface, on its side, where it will die unless some of the excess air is removed from the internal air bladder using a specialized hypodermic needle. Fish handling experts refer to the process as “fizzing.”