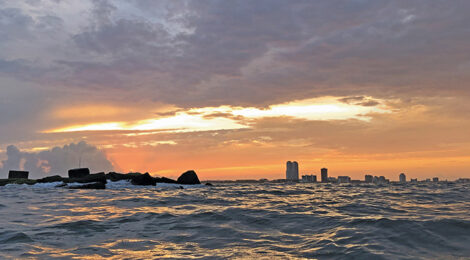 Braving summer’s sweltering heat can provide something different each day and not exhaust all of the angling opportunities.

Across Texas, August is best known for its sweltering heat. However, coastal anglers know that braving the heat can be rewarded with outstanding angling action. Actually, aside from the heat, the biggest problem facing fishermen over the next month will be what species to fish for and how to target them. While those are questions anglers commonly must answer when planning a day on the water, they become exceedingly complicated during August because there are so many options available to coastal anglers.

Beginning in the bay, every body of water from the Lower Laguna Madre to Sabine Lake will be producing good catches of speckled trout, redfish, flounder, black drum and more. Not only will there be a variety of active species to target, but anglers can chase them in a variety of ways.

Early summer mornings will find plenty of fish in the shallows. Anglers getting an early start can catch specks and reds on topwaters at first light. Black drum and flounder can be targeted with a variety of natural baits, scented artificial lures or jigs tipped with dead shrimp or scent strips.

Later in the morning, more specks will be found over deeper flats, along channel edges and around deep structure.  There they will be easier to target with soft-plastics, shrimp or lures under popping corks or freelined shrimp, pinfish or croaker.

Channels that criss-cross flats will be filled with drum willing to take live or dead shrimp. Redfish, however, will remain on the flats where they can be targeted with spoons or soft-plastics. Fishermen can also catch good numbers of spottails by soaking bait – cut shad, ballyhoo, mullet or ladyfish – in potholes or guts on the flats.