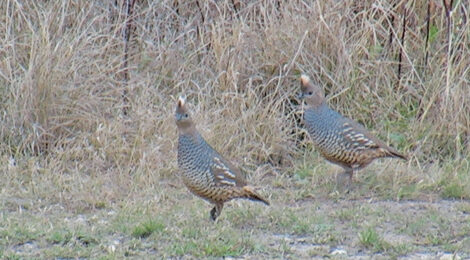 Typically February is the month hunters transition from hunting with center-fire rifles to quick pointing 20 and 28 gauge in their pursuit for bobwhite, and to a lesser extend scaled or “blue” quail.  This year, early field reports indicated a wide range of conditions across this big expansive and diverse state with bobwhite number low in the panhandle, rolling plains and cross timbers areas — mostly in the northern part of Texas.  Blue quail numbers, that are more drought resistant. offer better recruitment and a different hunt challenge.

Texas Parks & Wildlife Department’s assessment following August field observations generally reported plenty of birds heard calling, but few sightings.  Some said it was possibly due to more cover that came up after spring rains that extended on into summer.  However, even incorporating a late adjustment in the report indicated that while numbers were down and the reality was not good, but may not be as bad as originally reported for the northern part of the state.

In south Texas, which has its own topographic and vegetation diversity within that region, quail numbers were up or at least promising.  Most notably Brooks and Kenedy counties had good reports with above average hunting to very good hunting expected.  The area west of I-35 to Del Rio also expected above average to good hunting.

What was also noted in each individual eco-regions reports and graphs was the up and down trends of these resilient birds dating back to 2007.  It seems these birds historically make some gains and then when conditions decline so does their recruitment.

That was until about 2014 to 2017 almost statewide bobwhite quail numbers were up to well above the mean-average.  Then in 2017 or 2018 there was a decline and since then the struggle has resumed with numbers falling below the mean average number.