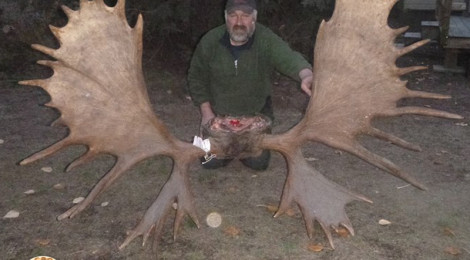 A bull moose taken by a hunter in 2013 in Yukon Territory has been verified by the Boone and Crockett Club as a new World’s Record.

With a final score of 263-5/8 Boone and Crockett points, the bull has the largest antlers ever recorded for the Alaska-Yukon moose subspecies. The previous record, taken in Alaska in 1994, scores 261-5/8. These are the only two specimens on record to score over 260. The third-largest bull scores 256-6/8.

Since 1906, Boone and Crockett’s trophy data has been used to measure the success of conservation programs across North America. The Club’s scoring system rewards antler and horn size and symmetry–classic symbols of outstanding habitat, strong recruitment of animals into older age classes, sustainable harvest objectives and other elements of sound wildlife management and fair-chase hunting.

Buckner was a member of a Boone and Crockett Club special judges panel convened at the Wild Sheep Foundation convention, Jan. 24, in Reno, Nev., to verify the World’s Record status of this moose.

The new World’s Record was taken on a self-guided hunt by Heinz E. Naef of Dawson City, Yukon. He was hunting along the Yukon River near Stewart Island on Sept. 22, 2013.

Naef carried a .303 British with open sights and 180-grain Winchester ammunition. The hunter stalked to within 35 yards of the big bull before taking the shot. Naef was hunting for winter meat, not a trophy. He removed the antlers from the skull with a chainsaw, nicking them in the process, and did not keep the cape for a shoulder mount.