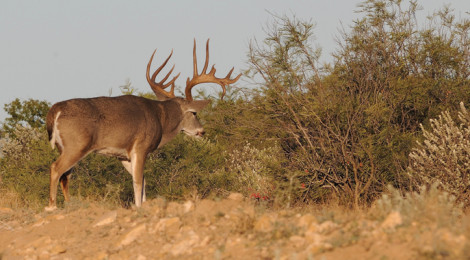 TOJ’s Whitetail Editor shares a look back and some of the exceptional bucks he observed this past hunting season.

As I wrapped up another semester as Department Chair of the Wildlife Management program at Southwest Texas Junior College in early December, I began to prepare for my annual brush country quest when I would spend daylight to dark hunting and filming those antlered denizens of the thorn scrub, whitetail deer.
I caught up with my hunting companions near Eagle Pass on December 11, and shortly afterwards was filming a 150-inch caliber 10-point that I first saw in 2011 when I thought it was three to four years old, making it at least six to seven years old this year.  With a spread of 21 inches and 12-inch tall G-2s, he is a sight, but he has never developed G-4s in excess of three to four inches, one of which angles outside his long beams.  He was definitely old enough to harvest, but I was simply satisfied to film the beautiful animal and look forward to seeing him next year, that is if he survived.