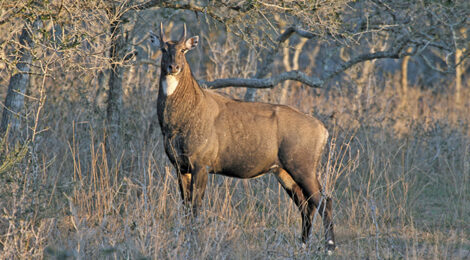 Also known as the Blue Bull it is the largest Asian antelope that provides a challenging hunt and superb table fare.

Hunting exotic game animals in Texas continues to gather an ever-growing following of enthusiastic hunters.  While axis, sika, fallow deer and aoudads have a much more broad distribution across the Lone Star State, the beginnings exotic animals from around the world started with nilgai when they were introduced to the King Ranch in the 1920s and 1930s.  Also known as the blue bull for its bluish-gray coat during the rut that peaks in December through March, nilgai are recognized as Texas’ original big game exotic specie.

The first nilgai I ever saw was while hunting spring turkey on the Kenedy Ranch in 1984.  I was the guest of friend and Houston real estate developer Scott Martin.  I had come down at his invitation to hunt Rio Grande turkeys and do some calling for other friends.

While on the turkey hunt and after harvesting a really nice 11 inch longbeard with one and a quarter inch long spurs Scott asked if I wanted to shoot a nilgai.  My first thought was like many inexperienced, first time observers of these exotic imports, “Why would I want to shoot an animal that has a somewhat-horse like head and horns much less than a foot long that are somewhat reminiscent of a mountain goat?”  The only horned animal I had experience hunting was a pronghorn antelope.  The majority of my big game hunting had been for antlered critters like whitetail, mule deer, and elk.

However, I had eaten my fill of delicious nilgai meat while in camp that had either been ground into amazing chili, spaghetti meat sauce or stroganoff, or cut into steaks that were grilled or chicken friend then smothered in cream pepper gravy.  The meat from these animals is truly a delicacy.  In fact I would rate nilgai as one of my top five game animals for superior table fare that also includes moose, bison, axis deer and elk.