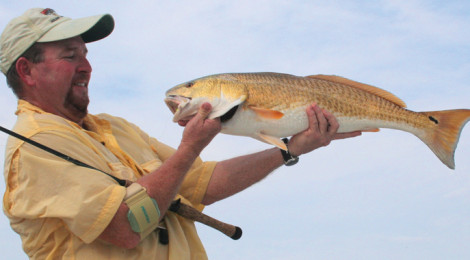 Understanding how redfish adjust to changing colder conditions, and their movement pattern will help put you on more fish.

Story and photography Robert Sloan
A classic example of how redfish transition from the shallow flats to deeper water as falls turns into winter goes all the back to the 70’s when netters were working on wiping out the redfish populations along the Texas coast. Just prior to a front’s arrival the nets would be set out across the Army Hole at Port O’Connor. As the water temperature began to drop big schools of reds would move off nearby shallow flats to the deep and warmer water of the Army Hole. On more than one occasion I saw more nets loaded with enough reds to sink a boat.

That’s a fairly simple example of pretty much how the seasonal change works on reds. On warm and sunny days redfish will more than likely be on the shallow flats feeding on small crabs and mullet. Some of the best fishing of the year will be for reds on the flats from Port O’Connor southward to Rockport, and on down to the Lower Laguna Madre.