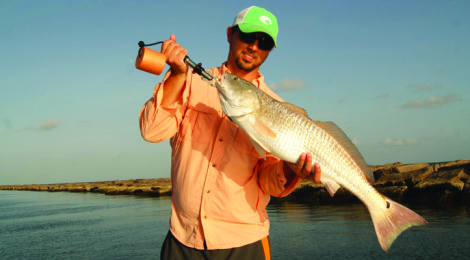 From Freeport to Sabine Pass, anglers can count on a variety of species feeding along the granite as the transition into spring continues.
Story and Photography by Nate Skinner

A subtle thump rattled down the blank of the rod, so precise, I could feel it through the cork handle. The braided line became taught immediately, as if the fish below had already inhaled the offering and was swimming off with it, unknowingly with a hook in its mouth. A snap at the wrist and raising of my forearms changed this in a hurry. It felt like I had hooked a cinder block with a shaking head. The familiar, downward tugs at the end of my rod with each head shake peeled a few yards of drag between handle turns.
“No doubt, I know what this is,” I thought as the scrappy brute finally began to give in to my upward pulls against it. After weeks of grinding, it sure felt good to put a bend in a rod. The black bars that striped the sides of the sheepshead shimmered, and a bright sheen from the sun lit up the fish as it came to the surface in the emerald green water. Amongst the brine, the gulls, and the granite, not to mention the warm sun and southern breeze, it finally felt like spring.
As we enter into the fourth month of the year, consistency once again becomes a prevalent part of inshore anglers’ vocabulary. Mild temperatures have returned to the Texas coast and with them come less extreme weather patterns and more aggressively feeding fish. All things point to anglers being able to catch more fish in abundance and in a variety of species as well.
Estuaries of the Upper Texas coast are the last to warm up as winter transitions into spring — they are larger, deeper, and see colder air temperatures than any other part of the Texas coastline. This combined with a year that has already seen ample amounts of rain, is creating a pattern that provides anglers an opportunity to catch a variety of species in one location, the Jetties. From the Freeport Jetties to Sabine Pass, salty tides from the Gulf of Mexico will stack up more species of fish along the granite blocks than in any other location on the upper coast this month, providing a “grab-bag” of opportunities—all kinds of fish will be feeding here.

← Reel Logic
When the Wind Blows →