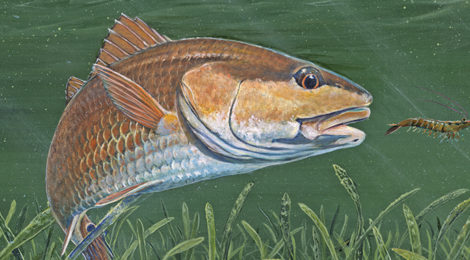 During the heat of summer the more heat tolerant redfish become primary angling targets while drifting, wading and kayaking the shallow grass flats. There anglers have the opportunity to cast live bait found in these grassy haunts as well as fake imitations.
Steve Whitlock, popular wildlife and marine artist has captured such a coastal aquatic scene of a redfish chasing down its next meal, a shrimp. It is a scene anglers along the entire Texas’ coast anticipate to round out a great day on the water.
Whitlock’s “Grass Flat Redfish” is the companion painting to his “Grass Flat Seatrout” that graced the covered of the July 2020 issue of Texas Outdoors Journal. For years he has been and remains a favorite at numerous CCA fundraising banquets. Many of his art pieces have been showcased as a part of CCA’s Banquet Dinner print program.
For more information on “Grass Flat Redfish”, the companion piece entitled “Grass Flat Seatrout” or other fine works of art by Steve Whitlock visit www. stevewhitlock.com, call (941) 359-8106 or email steve@stevewhitlock.com.
— Bill L. Olson