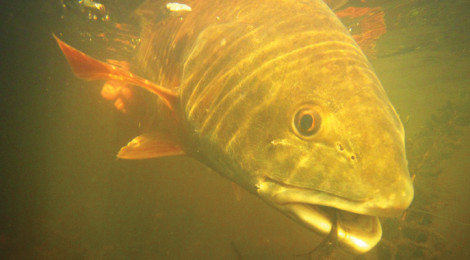 TOJ-SG / January 30, 2014 / Comments Off on Addicted to Flyfishing / Feature Articles

Once introduced to the basics of flyfishing for trout and reds, the lure of this type of shallow water fishing becomes habit forming for many anglers.

It wasn’t so long ago that seeing a fly fisherman targeting reds and trout along the Texas coast was about as common as seeing Boone & Crockett bucks in the Pineywoods. But over the past decade or so fly fishing has become the IN thing among a growing contingent of upper echelon anglers wielding 8 to 9 foot fly rods loaded with floating weight forward lines designed specifically to catch shallow water reds and trout.
Where I do most of my flyfishing it’s not unusual to see a dozen or more “fly” skiffs being polled along the clear water flats on any given weekend. I’ve been flyfishing Texas for over 45 years and never, ever thought I would see the day that flyfishers were the norm in salty currents. But we are there, and many conversations at fly shops and fish taco joints along the tide line of places like Port O’Connor, Rockport and the Laguna Madre center on the best lightweight skiffs and flyfishing gear from rods to reels, to flies and polarized sunglasses.