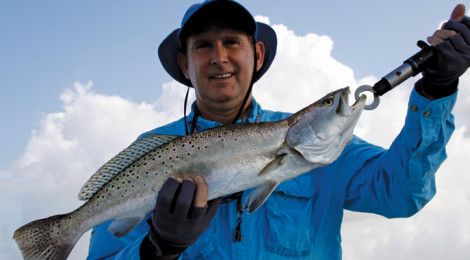 Many soft-baits have more inherent action and are easier to work than most hard plastic plugs, and will catch their share of trophy sow trout.

For many Texas inshore fishermen, February means one thing — seeking big sow speckled trout in the midst of some of the year’s worst weather. Every year, wall-hanger specks are taken from bay systems up and down the Texas coast during the weeks on either side of Valentine’s Day. The majority of sow speck seekers will be throwing either topwater plugs or slow-sinking lures. In fact, the majority of Texas inshore fishermen believe topwaters and slow-sinking plugs are the only way to catch trophy trout, while soft-plastics are only effective for schoolie specks. While topwaters and slow-sinkers do account for plenty of big trout each year, there is something to be said for throwing soft-plastics in search of big yellow-mouthed sow specks as well.
In fact, there is no reason trophy trout baits have to be hard. Today there are several soft baits ideally suited for big trout duty. More often than not, it is a matter of anglers choosing the proper bait based on the prevailing conditions and type of bait that is active in a given area.