Browse: Home   /   ADJUSTMENTS WHEN FISHING THE BACK LAKES 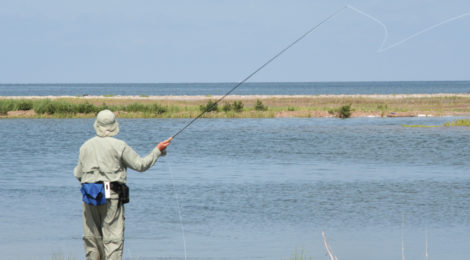 ADJUSTMENTS WHEN FISHING THE BACK LAKES

TOJ-SG / April 1, 2017 / Comments Off on ADJUSTMENTS WHEN FISHING THE BACK LAKES / Feature Articles

Going shallow for reds and trout is a whole different ball game than fishing open bays.
Story and Photography By Robert Sloan

The difference between fishing bays and backwater estuary lakes is like night and day. Bays are considerably deeper than the back lakes. And on most days the types of lures you’ll choose to use on the shallow flats will differ greatly than what you would tie on to fish the deep and wide open bays.
Here’s a good example. One of the most popular backwater areas to fish at Port O’Connor is Pringle Lake. It’s average depth is 1 to 3 feet deep. It’s loaded with grass, mud, shell and sand. People like to fish Pringle because it’s one massive clear water flat. While on a drift you can not only blind cast but site cast, as well. It’s fun and you never know what’s going show up next. It might be a trout, a big red or an entire school of black drum.
The key to hooking up is knowing what each species will most likely eat. For example on Pringle a 3 1/2 inch Assassin Sea Shad in pumpkin/chartreuse is perfect for trout. Reds on the other hand often prefer something like a small mullet. My favorite for that situation is 31/2-inch Yum Money Minnow rigged on a 1/8 ounce jig head.
One fish you’ll often see a lot of in the back lakes is a black drum. They generally won’t touch a lure. But I’ve proven that to not be so true. They will light up on a Berkley Gulp, especially when it’s dropped right in front of them.
For the most part they like fresh dead shrimp. And if you really want to get their attention peel the shrimp before skewering it onto a shank of a hook.

← CAPSIZED ON SAM RAYBURN
Get to the Ditch →