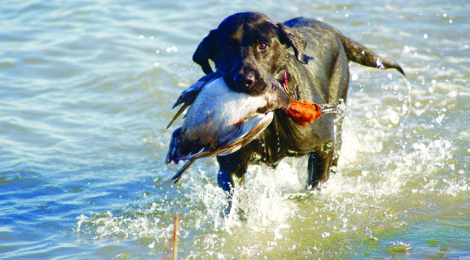 It’s a South Texas Thing — inshore and offshore fishing, with a choice of dove or duck hunting.

It was hot, I mean scorching hot, when we arrived in the field. Tucked up against the Rio Grande River, I’m pretty sure I saw steam rising from the ground as the sun glared off sunflower stalks and the windshields of border patrol vehicles far off in the distance. We were about as “south” as we could get in South Texas.
Taking our time, we spread out on the edge of the field as shadows began to grow and the evening breeze cooled the air, as the sun began to sink. About every fifth row of sunflowers there was a sendero, maybe 15 feet wide where the seed bearing weeds had been shredded the length of the field. With the amount of seeds crunching under my boots the afternoon was looking good.
Loading up the games began. It was slow at first, with one bird here or a single there. “From the left,” someone called out. “To the right,” came another command. Soon, the traditional call of “Over!” came regularly. White wings and mourning doves poured into the field, diving over the trees and hitting the deck fast in hopes of a quick evening feast. When the dust finally settled it was hard not to smile.
There’s just something special about the nonchalant, relaxing sport of hunting dove. When the birds are present, it’s hard to not kick back and enjoy a relaxing shoot with a few antics and jokes amongst good company. Combine an afternoon like this with a morning fishing trip before hand in the pristine, salty waters of the Lower Laguna Madre and a sportsman’s fantasy is quickly in the making.
At the end of this hunt, that’s exactly where I found myself — heading back to the comfort of Getaway Adventures Lodge in Port Mansfield for a hot, tasty meal and a good night’s rest before round two of a South Texas Cast-n-Blast adventure. And to think tomorrow afternoon could be a repeat — after catching a few state water red snapper in the morning of course.