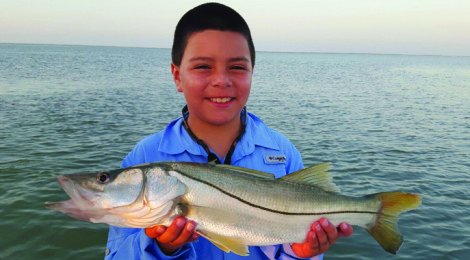 Whether inshore or nearshore, anglers have variety of available species to target in the fall.
Story and Photography by Danno Wise

September is still summer – make no mistake about it. And, anyone who has spent any time on the Texas coast during September can certainly attest to the sweltering temperatures usually felt during the ninth month of the year. However, even though both the calendar and thermometer confirm September is a summer month, there are unmistakable signs of fall in the air in the weeks immediately following Labor Day. Public schools are back in session. Hunters have uncased their shotguns. Football season has kicked off. Days are getting shorter and, along the Texas coast, the table is being set for outstanding autumn angling action.
One of the most popular fall fishing activities is looking for bull reds along the beachfront. However, many fishermen don’t realize the majority of the spawning size red drum have already made their way in from the open Gulf by September and are hanging out in the passes and along the beachfront awaiting the migration of mature fish from inside the back bays. In fact, the stage for this frenzy of fish fishing activity is usually set in August when oversize fish begin showing up around the jetties, passes and beachfronts.
September also offers the often calm conditions of summer. Though fall is on the horizon and one or two weak fronts may push through, September is usually too early for any really strong front. And, September is far less crowded than summer months, offering fishermen their pick of productive stretches of water.
But, enough about the conditions anglers experience during September. The fish are the main attraction and in September, inshore and nearshore anglers have their pick of plenty of available species.
As mentioned early, bull redfish will be thick around the jetties, in Gulf passes and up and down the beachfronts. Anglers fishing the surf zone should concentrate on stretches of surf adjacent to a Gulf pass in order to enhance their chances. During September, the vast majority of redfish found “on the outside” will be oversized, with many truly monstrous specimens being caught every year. Later in the month, these “bulls” will be joined by upper slot sized fish leaving the bays. But, for the first few weeks of September, most slot size redfish will still be “on the inside.”