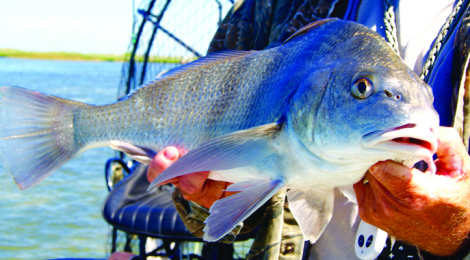 I had never fished from an airboat before. These extreme shallow water machines had always been associated with duck hunting in my mind, and over the past few years they have carried me to many a duck blind. This morning however, I was climbing aboard one toting a tackle bag plus a rod and reel for a different kind of hunt. Loading the aluminum craft, Captain Jay Nichols greeted me with some “pep” in his stride, scampering around the dock seemingly anxious to get out on the water. It was clear he was pumped about the day’s game plan, and later I would understand why.
Nosing his boat away from the dock, Nichols cranked the engine as we zipped up our jackets and donned earmuffs to minimize the roar of the loud fan motor that would push us across super skinny water. Out on the flats the sun began to rise, heating the cool morning as we cruised towards remote mangrove islands and back lake ponds. It was clear there were plenty of fish on the open flat we were crossing, as small groups of redfish and black drum fled in all directions in the clear water as we scooted over them.
I couldn’t help but think, “We sure are passing up quite a few fish,” but we kept going until we were well off the grid and void of any other boat traffic. As the airboat came to a halt, it was now clear why this became our destination. The mangrove shoreline that formed the small lake we were in set the stage for a shallow water angler’s fantasy. Wakes pushed in every direction.
“They weren’t stacked in the same place that they’ve been the past few weeks,” said Nichols, “But I think we’ve just found them here in this lake.”