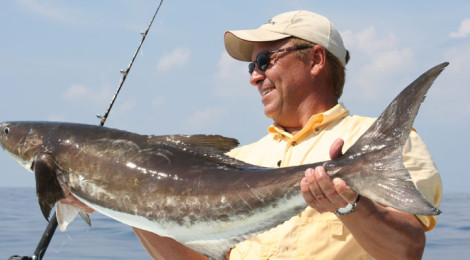 One of the most powerful fish in the Gulf of Mexico is a cobia, or lemon fish, and are pound for pound like a bulldozer with fins.

One thing that is certain about ling is that you never know when or where they are going to show up. And more often than not when you do see one on the surface it’s ready to eat anything from a whole pogie to something like a Super Spook topwater plug.

The first ling I tangled with was at the Darlington several miles west of Pass Cavallo out of Port O’Connor. We were fishing for trout with live shrimp when about a 60 pound ling showed up. The water was trout green and we were catching both trout and reds that weren’t claimed by the sharks before we could get them in. When the bronze-colored ling showed up on the surface, about 20 feet from the boat, I pitched out a live shrimp and before I could blink it was game on. Within a few seconds the 17 pound-test line had melted off the Ambassadeur baitcasting reel to the bare spool, and just like that the prized catch was gone.