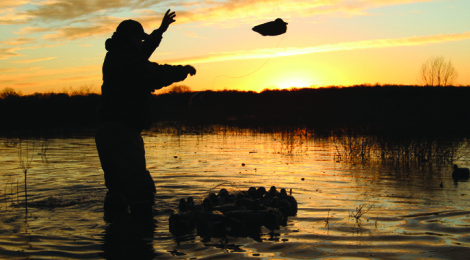 Duck Hunting —It’s all about Decoys

TOJ-SG / December 1, 2015 / Comments Off on Duck Hunting —It’s all about Decoys / Feature Articles

Trying to figure out the best possible decoy set up is a big draw for most waterfowl hunters.

Duck hunting without decoys is akin to fishing without a hook, which is why decoys are an integral part of waterfowling, regardless of where you hunt. As hunters, we have a love hate relationship with our decoys. On some days they can do no wrong. Conversely, there are days when decoys seem to be flaring every bird in sight, including coots.
Over many decades of duck hunting hunters have come up with all sorts of decoys and decoy spreads. Some work, some don’t. But it’s a fact that trying to figure out the best possible decoy set up is a big draw for most of us.
Probably the most entertaining decoy ever created is the spinning wing Mojo mallard, a.k.a. motion duck decoy or spinner. When it was first introduced to the world of duck hunting, well over a decade ago, it was like magic and it was a rare day that a spread didn’t have some sort of motion decoy with white spinning wings.
There are various versions of the original Mojo. They all work, but the big draw with these decoys is not nearly what it used to be. Like everything else, ducks have gotten wise to the mechanical decoys, but they still work pretty well in various situations.
Denny Copeland, who has got over five decades of duck hunting behind him, has been using Mojo decoys for over 10 years.
“On some days you can’t do without a Mojo,” he says. “But there are other days when they will flare birds right off the spread. They seem to do real well early in the season. But as the hunting pressure increases ducks become wary of decoys with spinning wings. I do a lot of duck hunting on public lakes where there is lots of hunting pressure. That’s where the ducks see a lot of spinner decoys, and that’s when they will flare from them.”