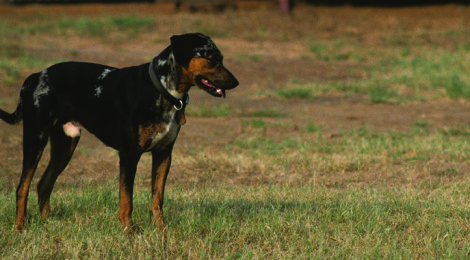 Big deer are rare, not to mention expensive, and a good blood-trailing dog could indeed be considered a hunter’s best friend.
Story and photography by Bob Zaiglin

Following all the mental and physical preparation not to mention time spent locating a well-managed piece of deer turf, you are finally situated in an elevated deer blind in mid-December anticipating the appearance of a trophy buck.
Before the ambiguous predawn figures take shape, the raking sound of a buck working over the trunk of a retama tree can be heard. Just as the sun peeks over the horizon, a doe bounds out of the brush only to pause and stare back into the direction from which she came.
Seconds later, a mature buck supporting 12 tall tines and long beams appears like an apparition standing cement-still gilded by the morning sun. Nothing could have prepared you for the sight of a buck of such magnitude. Instantly, your rifle is on the window sill and you attempt to hold it as steady as possible while placing the reticle on the buck’s shoulder. But just as the trigger is pulled, the animal lunges forward toward the doe, and the bullet smashes into the buck’s midsection. Seconds later, silence returns to the thorn scrub and what should be a joyous occasion suddenly turns nerve racking as that buck of your dreams was swallowed up by a sea of brush, perhaps to a long, lingering death and never to be seen again.
Wounding a deer is something all hunters try to avoid, but hunt long enough, and the inevitable happens.