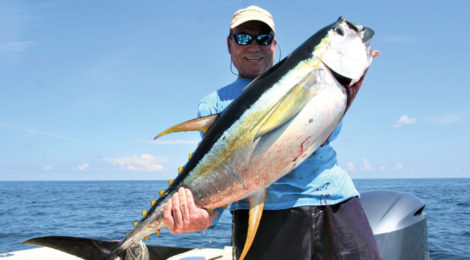 A Lot to Offer Offshore

On the horizon we could clearly see a flock of frigate birds working over a school of fish, and that’s where the big Hatteras was heading. Getting closer we stared in disbelief, it was something you had to see to believe. A huge whale shark was surrounded by blackfin tuna and one 400-pound class blue marlin was in a feeding frenzy. The 10 to 20 pound black fin tuna were using the shark as a shield to keep from getting eaten. That was out at a Cerveza Platform, roughly 80 miles offshore, and sitting in close to 1,000 feet of cobalt blue water.
The Gulf of Mexico has a lot to offer offshore fishermen along the Texas coast from the Sabine jetties to the U.S./Mexico border. King mackerel, red snapper and ling highlight the near shore species that are well within an easy run for the mosquito fleet of small console boats. Farther out in the deeper water tuna, dorado, wahoo, sailfish plus blue and white marlin are caught. It all depends on how far you’re willing to run.
“Most of the fish on the offshore menu are easy to reach in semi-calm seas,” says Bill Panto, who has about 30 years of fishing off the Texas coast, and around the world. “The Gulf of Mexico is one of the most difficult places to fish. It’s often rough, and the distance you have to run can beat you up pretty good. But once you get a taste of what can be caught it’s a type of fishing that will keep you coming back for decades.
“One of the best trips I’ve ever made was to one of the huge floating drilling rigs well over 100 miles off the Freeport jetties,” says Panto, who is a former Army Green Beret. “Four of us went out there for a three-day run of fishing for tuna, wahoo, dorado and blue marlin. The water around that rig was well over a thousand feet deep.”

← Coastal Bend Bounces Back
Heating Up on Texas’ Upper Coast →