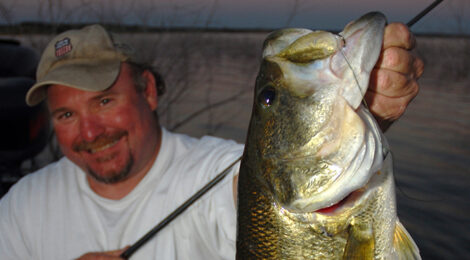 Good fishing stories have a way of becoming more colorful each time they are told.

Fishermen are among the world’s greatest storytellers. I have known very few who are not prone to stretch the truth every now and then.

Just call it the nature of the beast. Good fishing stories have a remarkable way of becoming more colorful each time they are told.

One of my dearest friends, Kirk Wolfe, was a master at spinning a yarn. Wolfe was a whale of a fisherman and an even better storyteller who had a knack for turning a casual trip to the beer store into an adventure.

I learned a lot about Kirk before he passed away in 2015. He had persuasive personality and a gift for capturing an audience. Sometimes he felt the inclination to embellish an already good fishing or hunting story to make it better.

Wolfe loved to prey on the naive. I once listened in awe as he tried to convince a group of novice deer hunters at a local bar that he could rattle in a spike buck by clicking a pair of spike antlers together. Amazingly, a few swallowed the bait.

You could always tell when Wolfe was hedging truth by a peculiar wrinkle that creased his forehead. A standing joke among his closest buddies was you could sometimes divide the outcome of his fishing stories by two and get pretty close to what really happened.

One of the most bizarre fishing tales I’ve ever heard wasn’t told by my friend — Wolfe. The story surfaced in 2007. It revolved around a giant catfish that reportedly leaped out of the water and gobbled up a lady’s 85 pound German Shepherd as it walked along the shores of Lake O’ The Pines in eastern Texas.

The catfish was said to weigh in excess of 1,000 pounds. It was rumored to be the same fish that had already snapped several trotlines fashioned from 750 pound test tarred nylon.

← A One Stop Coastal Option
Survivors of the Thorn Scrub →