Browse: Home   /   Gearing Up for the Spring Gobble 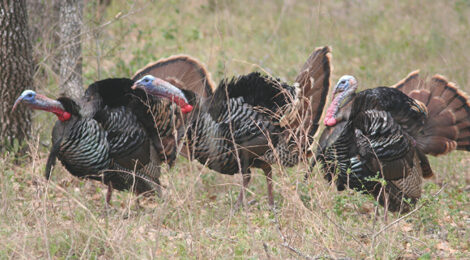 Gearing Up for the Spring Gobble

TOJ-RT / March 1, 2021 / Comments Off on Gearing Up for the Spring Gobble / Uncategorized

Now? Ha, for quail I still want that old .20 gauge, for dove the Savage Renegauge, same with waterfowl and turkey. However I need four to five different chokes.

Then for shells, every species requires something different.  Plus later in the season I’d switch loads again.

Now it is the time of year for spring turkey hunting.  The gear needed to be successful turkey hunting is specialized and totally different than what is used to hunt any other bird.  Sure, a couple of items cross over. Your Savage Renegauge shotgun and your underwear, after that you need to make adjustments —so let’s get started.

Turkeys get a bad rap. Some people act like they’re stupid. That is only by people that never have hunted them.  To start you’re going to have to camo to the max. Obviously pick a pattern that blends in with the terrain you’re going to be hunting. Camo up from head to toe — seriously. I just ordered some more facemasks from Quaker Boys.

You’ll also want to wear gloves. While setting, your hands will be your biggest source of movement. I don’t panic about matching my cap with my shirt, pants, boots and jacket. Nature isn’t one solid color as it naturally has a splash of this and a splash of that.

To help conceal it’s smart to use one of the small portable blinds that are basically a few panels that snap up in front of you. If you’re running gunning you can fold it up in a hot second, run to another spot, slap it up and be hunting in a Dallas minute. The last few years I’ve used an Ameristep Throwdown blind.

← About the February 2021 Cover
Staying Bowed Up In Spring →