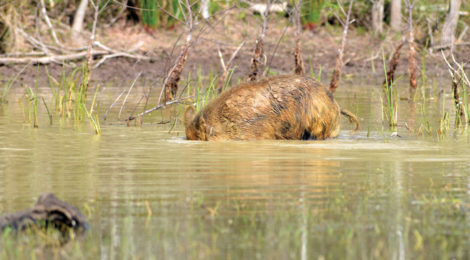 TOJ-SG / May 1, 2018 / Comments Off on Hog Problems and Solutions / Uncategorized

Texas we have a problem and it’s in the form of a destructive non-native animal. The presence of wild feral hogs on this continent can be attributed to centuries of man-made introduction — some intentional and some by accident.
According to numerous sources the first introduction to this continent occurred on Christopher Columbus second voyage in 1493. However, in 1539 Spanish explorer Hernando DeSoto brought 13 pigs to the area around Tampa Bay FL and is most often credited as being most responsible for the introduction of Sus scrofa to North America.
Reports state that within three years of their introduction DeSoto’s hogs had multiplied to over 700 animals. This estimate did not include the number that had been eaten by his men or those that escaped.
Other explorers contributed to the on-going introduction of wild hogs to this continent. New Mexico had them introduced by Cortez in 1600. Sir Walter Raleigh brought pigs to Jamestown Colony in 1607. With a thriving population of free-range pork favored by immigrating settlers, and an acquired taste by Native Americans, the hog expansion continued during the country’s westward growth in the 1700 and 1800s.
In the early 1900s Eurasian boar were brought to America and released for hunting purposes. The Eurasian stock soon escaped and bred with the domestic hogs to create a hybrid most often encountered today.