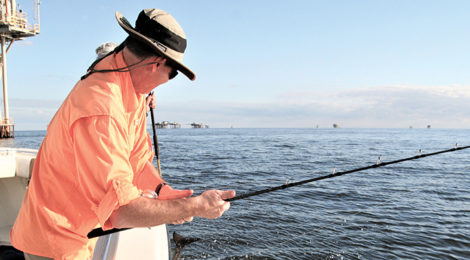 Hooked Up Inside and Out

In the summer time live bait rules inshore and offshore.

While talking recently to Capt. Mike Williams we hit on the topic of what baits were best for tarpon and kingfish off the Galveston beachfront.

“That’s a no-briner,” he said. “Live bait, not lures, rule anywhere on earth. I’ve caught a ton of tarpon and kings on all sorts of live baits. Very few on lures. You put out a live croaker, piggy perch or sand trout and you are going to catch something along the Texas coast. That’s a fact.”

And he’s right. Think about the king fish tournaments held along the entire Gulf coast. Very few of the tournament anglers use lures. It’s all about live bait.

Capt. Bill Platt, who is one of the very best at catching big kings, uses nothing but hardtails.

“If I can fish a couple of live hardtails behind the boat and kings are there we’re going to catch them. It’s that simple.”

Many marlin fishermen off the Texas coast have just about forgotten about pulling lures. For many years the technique of bump trolling live baits like bonito and hardtails is the only way to go.

Even snapper fishermen are warming up to the idea of fishing live baits. Greg Gamble and his crew of offshore anglers don’t leave the dock without at least a few dozen pinfish.

“We’re not the kind of fishermen that like to tie off to a rig and wait for a bite,” he says. “One way to find and catch big snapper is to drift fish structure above and below the surface with live pinfish. If big snaps are there that’s the way to catch them real fast.”

Inshore fishermen know that live baits rule during the hot summer months. Using a live shrimp along the jetties is one sure fire way to catch trout and reds. One of the best ways to