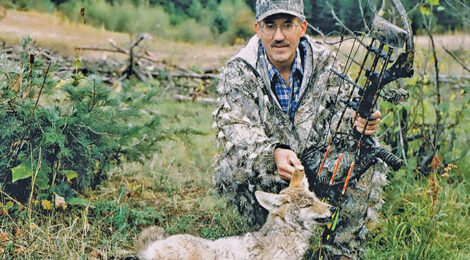 TOJ-RT / January 2, 2021 / Comments Off on Hunting With Short-Range Weapons / Uncategorized

When I first received a writing assignment on “short range weapons” I was apprehensive. Then within seconds of getting into it I thought uh-oh, there are all kinds of rabbit trails I could veer off on.

If you‘re a bonafide Texan you’re going to wonder what kind of plot would have designated short-range weapon hunting. I know that is what I thought when I heard you could only deer hunt with shotguns in Iowa. That seemed totally weird to me. If you’re in that same boat read on, we’re going to demystify it for you.

While it may seem strange to a Texan, there are a few states that restrict deer hunting to a short-range weapon. Other states have certain Game Management Units that are only open to SRW’s. This is driven by the concern the hunting will be conducted in highly populated areas.

Even Texas has a variation of this. My mom lives in Grayson County and on Hagerman National Wildlife Area deer hunting is limited to archery hunting or crossbow. The reason is not for safety but to let the bucks grow to maturity.

So, with the background laid out above, what are some good short-range weapon options for Texans?

Then you have to draw back your bow. That’s a lot of movement when you’re that close. It means you must in full camo, cover your scent, reduce noise and movement to an undetectable level.