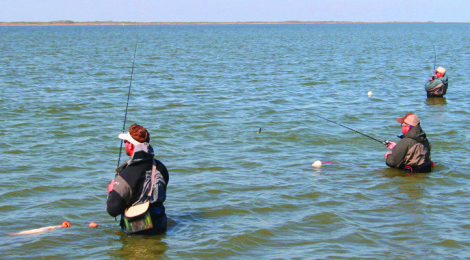 Set To Get Wet

The good, bad and ugly of wade fishing while doing it right.
Story and Photography By Robert Sloan

One thing you can say about Texas fishermen is that a whole lot of us like to wade. It’s a form of pure escape, adventure and one sure fire way to go one on one with trout and reds. But it’s also a way to find out what is on bottom, where there are hidden guts and isolated shell reefs. If you’re not a wade fisherman you are definitely missing out on an excellent angling experience. But, then again you might be smarter than those of us that get out of a perfectly fine boat.
One thing that I’ve noticed with over five decades of saltwater fishing is that Texas anglers like to wade fish a lot more than people in other coastal states. For example, wade fishing just about doesn’t exist along the coast of Louisiana and on up to Florida. The first time I saw people wading on Lake Calcasieu in Southwest, La. was after a bunch of Texas anglers went over there, jumped out of the boat and started catching lots of big trout.
I lived in Beaumont for 23 years, and rarely saw anybody wading on Sabine Lake. That is until the word spread about Sabine’s big trout being caught. Next thing you know the Galveston guides, like Dwayne Lowery, were bringing their wade fishing customers to Sabine and promptly began stringing up arm length trout, and lots of reds.
“I grew up wade fishing on Trinity Bay and on East Galveston Bay,” says Lowrey. “I just assumed that we could wade fish anywhere there were trout and reds to be caught. I heard about the big trout on Sabine. On my first wade fishing trip there we caught a load of big trout. The locals didn’t like that too much, but that’s another story. Then I heard about some heavy trout being caught on Calcasieu, so we loaded up and headed over there. Sure enough we started catching some very nice trout, and lots of them. Next thing you know there are wade fishermen everywhere on both Sabine and Calcasieu.”