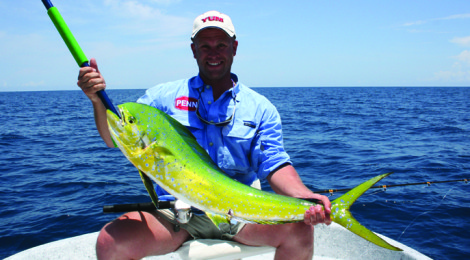 This ultimate game fish may also be the wackiest fish you’ll ever catch.
Story and Photography By Robert Sloan

Dorado could be the ultimate saltwater game fish. Consider the following — they are abundant and can be found in schools around a variety of structure. They will eat just about anything that won’t eat them first, and they will hit a variety of lures and even flies. When hooked they will light up like a Christmas tree, and come out of the water like a cat on fire. Plus, when grilled these feisty fish make some of the best tacos in Texas.
Call them what you want – dolphin, mahi-mahi, dolphinfish or dorado. They typically show up with warm currents off the Texas coast in June, and can be caught through late October. The fascinating thing about these fish is that they can be found just about anywhere in the Gulf – from one to 100 miles offshore.
They especially like feeding and holding in the shade of floating Sargasso beds. But I’ve also caught them around floating debris like wooden pallets, logs and plastic bags. Manmade structure like buoys and rigs will definitely attract and hold dorado of all sizes.
One of my best days of offshore fishing was about 79 miles out of Freeport on a 54-foot Bertram. The target fish were blue marlin and yellowfin tuna. But as we neared one of the big offshore rigs our spread of lures was attacked by a huge school of dorado in the 15 to 25 pound class. We quickly reeled those in and switched over to baitcasting rigs with 1-ounce silver spoons. It was like a circus. Every cast was a hook up, and in no time flat the cockpit was a bloody mess. When it was all said and done, we had 17 of the tasty fish iced down. Later that afternoon we had fresh dorado ceviche for appetizers followed with grilled tacos.
I’ve caught fish from East Africa to South America and can say from some pretty salty experiences that no fish on earth can light up and jump like a dorado. I’ve seen them under weed beds in gin clear water and they looked like a swimming neon rainbow of colors. When hooked the first thing a dorado will do is come out of the water like a rocket doing cart wheels. On light tackle, especially a fly rod, they are big time fun.
Dorado are fast growing fish. I’ve caught them up to about 45 pounds. The Texas state record weighed 65.70 pounds and was caught on June 21, 2008 by Ryan Foster while trolling a Moldcraft/ballyhoo rig.
Dorado can weigh nearly 3-5 pounds within a span of six months, and within a year can weigh as much as 20 pounds. A 4 to 5 year old dorado can weigh upwards of 45 to 50 pounds. The IGFA world record dorado weighed 87 pounds and was caught off of Costa Rica on Sept. 25, 1976.
Over the years I’ve caught dorado on everything from foot long chuggers to ¼ ounce jigs along the Texas coast from the Sabine jetties to the Texas/Mexico border.