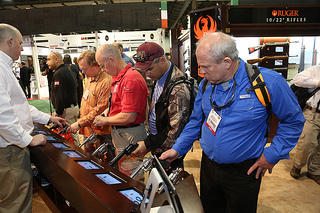 The 36th SHOT Show ran Jan. 14 to 17 at the Sands Expo & Convention Center. Attendance figures eclipsed last year’s total by the second day of the show and finished at more than 67,000, an increase of 5,000. “I think that really speaks to the quality of the event and the enthusiasm and passion of our industry to provide quality products for hunting, target shooting and personal and home defense,” said Chris Dolnack, senior vice president and chief marketing officer for the National Shooting Sports Foundation®.

NSSF, the trade association for the firearms, ammunition, hunting and shooting sports industry, owns and manages the SHOT Show.

The $6 billion industry has enjoyed robust sales the last several years, fueled in part by newcomers to the shooting sports who, according to an NSSF First-time Gun Buyers Report, are younger, more female and more urban based. Newcomers have identified target shooting and personal and home protection as the top reasons for purchasing their first firearm.

During the show, NSSF issued a first-of-its-kind report that confirmed the importance of the shooting sports to the U.S. economy. “Target Shooting in America: Millions of Shooters, Billions of Dollars” revealed that the money target shooters spent in 2011 resulted in $23 billion being added to the nation’s economy and supported more than 185,000 jobs nationally.

Combined data from Target Shooting in America and Hunting in America, a report released last year, shows that spending by target shooters andhunters had a total impact of more than $110 billion on the nation’s economy in 2011, supporting more than 866,000 jobs.

“Communities and businesses of all sizes benefit from these activities,” said NSSF President and CEO Steve Sanetti. “Our industry is proud to be an economic driver that has helped workers keep their jobs and support their families even during the most difficult economic times.”

Displays by more than 1,600 exhibiting companies filled the convention center and also rooms in the adjoining Venetian. Total show exhibition space was 635,000 net square feet, or 13 acres of product display.

Manufacturers of firearms, ammunition, optics, cutlery, apparel, accessories and law enforcement equipment introduced new products and services that retailers will offer consumers during the course of the year.

The past year was a challenging one for industry, which battled state and federal legislative efforts to restrict ownership of certain types of firearms. In addressing 2,000 industry leaders at the State of the Industry Dinner, Sanetti declared, “The State of our industry is renewed. More persons are entering the recreational shooting sports than ever before.  More hunters, more target shooters, more women, more diverse groups, more licensed gun owners and, as you all know, more firearms sales.

“Perhaps the best news of all is that, despite tremendous increases in these numbers, violent crime with firearms has decreased dramatically during the last five years, to early 1960s levels.”

Sanetti also pointed out that firearms accidents account for less than one percent of all fatal accidents in the country, according to the National Safety Council.

Safety was on display at the SHOT Show, with many companies showcasing the latest gun safes, cases and lockboxes. Also, NSSF’s national firearm safety education program, Project ChildSafe and its “Own It? Respect It. Secure It.” campaign, was highly visible at the show.

Outdoor Channel was once again the show’s Pinnacle-level sponsor.

Some of the country’s most well-known radio personalities, including Mike Gallagher and Lars Larson, broadcasted live from the show’s new “Radio Row.”

Among the many awards bestowed during the show was the NSSF Ken Sedlecky Achievement Award presented to Bob Morrison, longtime industry executive and former president and CEO of Taurus. SHOT Business magazine presented NSSF’s Sanetti with the Bonnier Outdoor Group Special Achievement Award in recognition of his industry leadership during the past year.

For the third time, NSSF hosted a charity golf event at the SHOT Show in partnership with the PGA Tour for Birdies for the Brave. The event at TPC Summerlin raised more than $100,000 for military homefront groups.

The SHOT Show is not just about selling and buying products. The show provides educational opportunities for firearms retailers at SHOT Show University and other seminars, and for law enforcement professionals at the Law Enforcement Education Program.

This was the first SHOT Show under its new management company, ConvExx.

The SHOT Show, which pumps more than $73 million into the Las Vegas economy, is committed to the Sands Expo & Convention Center through 2017. Next year’s SHOT Show is scheduled for Jan. 20-23, 2015.