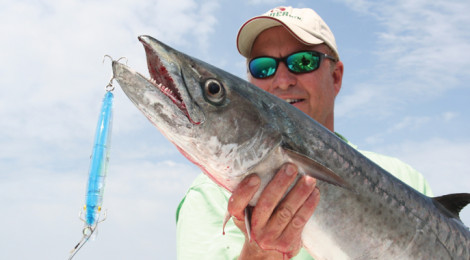 Who would of thought that Gulf Coast anglers could be catching trout one minute, then fire a long shot with the same lure and catch a king mackerel. That’s exactly what happened to Mike Barnes and me while fishing the surf along Matagorda Island at Port O’Connor.
We had just boxed several solid trout that were busting through pods of mullet in the first gut along a line of blue-green surf. The “hot” lure was none other than a chrome and blue Heddon Super Spook. Just about when that action played out on trout, I heard a rush of baitfish scattering out of the second gut, and right behind them was what appeared to be silver torpedoes. We both made long casts with the Spooks and before we had worked the lures more than two feet both of them were eaten by kings that ripped a hole in the water. These were big kings and in short order left us with limp line and two missing lures.
“How stupid was that,” laughed Barnes. “We both knew what was going to happen.”
Without some of sort of wire leader there was little chance we would land the kings. But it didn’t take long for us to rig up with king-proof leaders tied to a pair of flashy Bomber Long A’s in silver flash/chartreuse. These are 6 inch lipped lures that will dive down from 2 to 3 feet on a steady retrieve. They are king fish killers. And when worked in the first gut off the beach will fool trout all day long.
The months of July, August and September are prime for fishing the surf. Out of Port O’Connor and double dipping for trout and kings is a favorite run for many of my clients. When the surf is clean and green to the beach it’s game on for trout and kings between the Port O’Connor jetties and south towards the Matagorda Island lighthouse. That’s a section of surf that is clean and green more often than not. When the tide is green and full of baitfish it’s a sure fire thing that predators like speckled trout and king mackerel won’t be far away.