Browse: Home   /   Survival Of The Fittest 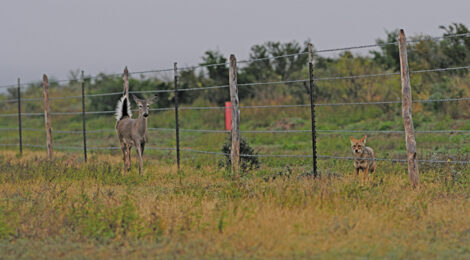 Survival Of The Fittest

TOJ-RT / February 1, 2022 / Comments Off on Survival Of The Fittest / Uncategorized

With all the pitfalls they must face, whitetails remain the most abundant and popular big-game animal in North American.

Standing motionless at the edge of an expansive oats patch, the buck’s appetite for what grain remained on the windswept red soil was overwhelming.  It was a harshly cold, windy South Texas January morning as the buck stood cement still, its antlers gilded by the early morning sun.  With broken tines on its right beam and six tall, ivory-colored points on its left, the buck had made it through another brutally competitive rut, but at its feet were minute droplets of blood that dripped from an antler wound in its brisket.  Unbeknownst to the buck, a band of coyotes attracted by the blood trace had followed it throughout the night, intent on satisfying their insatiable appetite for protein.

As the buck nervously entered the field, but before it could lower its head to obtain a mouthful of weathered oats, additional coyotes appeared at the field’s edge.  Focused on the canines, the buck exited the field, but not before the coyotes rushed in.  Moments later, the buck was backed into a thicket, fending off the relentless predators.

Initially, the coyotes feared the buck, and actually shied away from it as the animal reared up on its hind legs and lunged forward, driving its spear-shaped tines towards the brazen marauders, but when it thrust its head downward a third time, it lost its balance, but to no fault of its own.  A coyote had sunk its razor-sharp canines into the buck’s back leg and refused to let go.  Immediately the rest of the pack dashed in, and had the buck on the ground, flailing away as they ripped hide and bloody flesh from the traumatized animal.