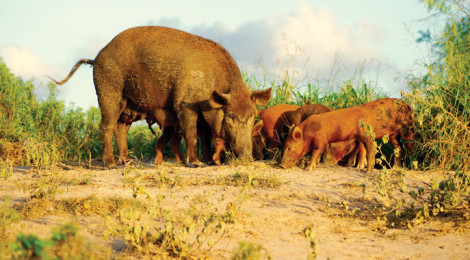 With stick and string, or a pistol, hunters can experience thrilling, intimate hunts for wild hogs.

The distinct sound of a pack of hogs crashing through heavy cover is one that many Texas hunters know well.  The grunting, squealing, and snorting from a riled up sounder of pigs often echoes through the woods of the Lone Star State.  It’s hard to avoid the adrenaline rush created by this ruckus.  The excitement is amplified when the scene unfolds at an extremely close range.

Hunters armed with stick and string or a hip-holstered pistol can take the sport of hunting hogs back to a much more primitive time.  Sure, harvesting several pigs with one volley from a semi-automatic rifle can prove a shooter’s marksmanship.  But, what’s more exciting than a close encounter?

Bow and pistols hunters have to put themselves within close distances of some of the smartest creatures on wild terrain to seal the deal on harvesting a pig.  Travel routes, the lay of the land being hunted, and wind direction are just a few of the countless variables that must be considered.  These are tactics that date back to Native Americans.

The sharp shooting skills of the some of the deadliest outlaws from the days of the “Wild West” are necessary too.  Hunters desiring to experience a successful close encounter hog hunt with a bow or pistol must exhibit determination and precision.