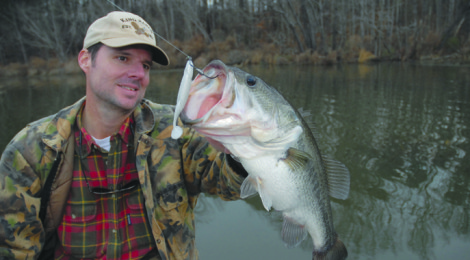 Time to Get Skinny

Fish skinny and sooner or later you’re going to get bit.
Trust me. I’ve been doing it for years. So have hundreds of thousands of other anglers who call themselves bass fishermen.
What gives with the call to shallows?
Like flies are lured to honey, bass are always beckoned to skinny water when spring rolls around. That’s because days are getting longer, water temperatures are climbing and the bass’ biological tickers are telling them it’s time to perpetuate the species by spawning.

While some fish will spawn in deeper water, most will carry out the process in water depths in the 1-6 foot range, often times in water clear enough that you can easily depict the beds — and the fish — with the aid of a good pair of polarized sunglasses.

Targeting bass that can be visibly seen in spawning beds is fun, but it is not always the most productive way to fish during the springtime.
That’s because bedding bass can at times pose way too much of a challenge for the average angler to catch. Furthermore, not all of the bass in a given lake will rush to the bank and do their thing at exactly the same time.

Instead, bass spawn in waves. For every bass you spot around a shallow spawning bed, there may be a half dozen pre-spawners — possibly even more than that — finning around within casting range over your shoulder.

Besides the increased opportunity to catch large fish, one of the best things about springtime fishing is there are so many different techniques and literally dozens of baits that anglers can use to fool them. Naturally, some baits will produce consistently better results than others will.

Here’s a starting line-up of 10 good artificial baits to have handy when you head to your favorite bass lake over the next 60 days:

Senko: The Senko is a highly versatile soft plastic jerk bait shaped similar to a Bic pen — plump in the middle skinny at both ends. It can be rigged Texas style with a light slip sinker, Texas-style weightless or wacky rigged through the egg sac.

It’s a great bait to use when blind casting over shallow spawning flats, along shorelines or around bushes. The Senko is simple to fish. Just cast it out, let it fall and twitch it every now and then. Rigged weightless, the bait darts around erratically with every twitch. It’s also impregnated with sea salt, which gives it some extra weight and makes it easy to cast.