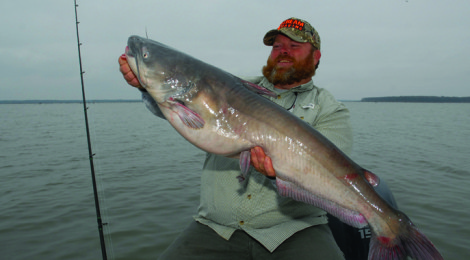 Jason Barber was raised on the shores of Cedar Creek Lake as the grandson and nephew of two of the hardest core catfishmen to ever wet a hook in the 33,000-acre reservoir near Athens.
Hang around the guy for a while and you might begin to wonder if he was born on a boat with a cast net in his hands.
To hear Barber tell it, his late grandfather and uncle loved to fish for catfish almost as much as they liked to eat them. If there was a sweet spot out there the two men didn’t know about, it’s probably because the spot wasn’t so sweet after all.
Not surprisingly, Barber cleaned a ton of whiskered fish when he was a kid. He ate a bunch of them, too. Fried flathead fillets ranked especially high on his grandfather’s menu when the dinner bell rang.
“That’s what I got instead of baby food,” Barber joked. “I used to spend hours catching bait for their trotlines. When we weren’t baiting and running those lines it seems like we were always cleaning fish. It’s just what we did.”
Decades later, Barber’s love for Cedar Creek and the piscatorial titans that live there still runs as deep as it ever did. In fact, he has since turned what started out as a childhood pastime into a way of life and a means of hammering out a living.
Now 39, Barber has matured into a Grizzly Adams looking guy who has been working full time as a “multi-species” fishing guide on Cedar Creek since 2004. Multi-species means Barber targets whatever happens to be biting best at the time.
On Cedar Creek, there are always plenty of hungry mouths to feed. Located in Henderson and Kaufman counties, the northeast Texas reservoir ranks as one of the top lakes in the region for blue and channel catfish. The lake also maintains healthy populations of largemouth bass, crappie, white bass and hybrid stripers.
Barber will go after them all over the course of the year, but his fun-loving client base is founded mostly around blue cat, hybrids, whites and crappie.
“I’ll occasionally guide bass anglers who are looking to learn something about the lake ahead of a tournament, but the majority of my clients are just wanting to get bit and catch a few fish for the freezer,” Barber said. “Between the catfish, white bass, hybrids and crappie we can usually get it done.”
While winter’s chilly weather can slow the fishing to a crawl on some lakes, the bite has a tendency to be red hot on Cedar Creek. In fact, there may not be a better time or place for meat hunters to soak a bait for fat cats, whites and hybrids.
I paid Barber a visit over the Christmas holidays and we split up the day by soaking baits in water as shallow two feet and as deep as 35. As always, we caught fish everywhere we went.
Skinny Water Blues
During the dead of winter, chilly weather typically drives the water temperatures on many Texas lakes into the 40s and 50s. It’s only natural to assume the big chill would turn the shallows into a liquid ghost town, but that isn’t the case on Cedar Creek.
“There are always going to be some big fish to be caught drifting over deep water this time of year, but there’s plenty up shallow, too,” Barber said. “You might be surprised at what you’ll catch out of knee-deep water this time of year.”

← Sweetheart Specks
About the February 2015 Cover →