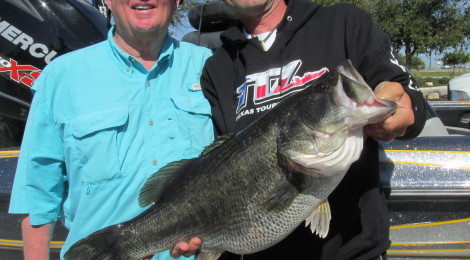 After almost a month of no entries into the Toyota ShareLunker program, two fish were caught on the same day, Tuesday, March 18.

Ken Leonard of New Braunfels was fishing in Austin’s Lady Bird Lake when he caught Toyota ShareLunker 556. The 13.0-pound fish took his three-inch River to Sea swim bait at 1 p.m. The fish was 25 inches long and 20.5 inches in girth.

The fish is the first ShareLunker from Lady Bird Lake. The previous heaviest fish reported from the lake weighed 12.13 pounds.

Toledo Bend produced its seventh all-time ShareLunker about 6 p.m. Lance Wakeland of Fenton, Missouri, was fishing in two feet of water when the 13.30-pound bass took his spinner bait. The fish was 24.5 inches long and 21 inches in girth.

Prior to Leonard’s catch, the last ShareLunker entry was February 21. While March is typically the peak month for catches of big bass, cold weather keeping water temperatures low apparently has slowed the movement of big bass into spawning areas. Wind and rain on weekends have probably kept many anglers off the water. Two catches on the same day could be an indication the pattern is changing.

For complete information and rules of the ShareLunker program, tips on caring for big bass, a list of official Toyota ShareLunker weigh and holding stations and a recap of last year’s season, see www.tpwd.texas.gov/sharelunker/. The site also includes a searchable database of all fish entered into the program along with pictures where available.