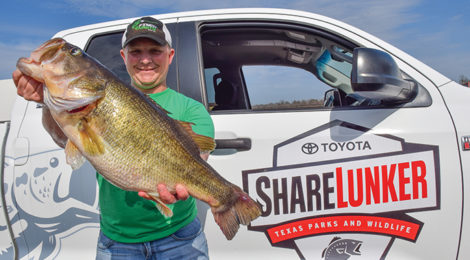 A Call For Lunkers

Anglers loan 13 pound and larger Texas-caught bass to the state agency for spawning and genetics research.

The TFFC is headquarters of the Texas Parks and Wildlife Department’s Toyota ShareLunker program. The program was implemented in 1986. It was founded on the premise that anglers would be willing to loan 13 pound and larger Texas-caught bass to the state agency for spawning and genetics research and ultimately producing bigger and better bass for Texas anglers to catch.

Some initially thought the program was destined to fail because anglers would not be willing to hand over their biggest bass, but they were wrong. At the start of the new decade ShareLunker had accepted 576 fish between 13 and 18.18 pounds from more than 60 different lakes.

Close to half (250) of those fish were caught during March. It’s considered the top big bass month because it falls during the height of the spawn, when the fish move shallow and are most vulnerable to anglers of varied skill levels.

The popular program has undergone a slew of changes in recent times meant to boost participation and heighten knowledge about big bass distribution across the state.

Perhaps the most significant change came in 2018. That’s when TPWD launched a year-round format offering prize incentives to anglers who catch big bass weighing upwards of eight pounds and electronically enter their fish in one of several categories.

Photos of the fish being weighed on a digital scale and measured on a rigid measuring board must accompany entries. Fish caught during a tournament must be supported by a weigh-in slip or website links for documentation, if photos are not available.