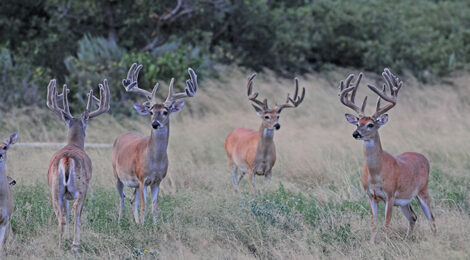 Having always fascinated man, the development of a new set represents one of nature’s most fascinating events.

On a quiescent early March morning in South Texas, an old buck graced with an incredibly large rack negotiated its way through a jungle of thorn scrub.  In an attempt to avoid the flesh-ripping claws of lime prickly ash and Wright’s acacia, it proceeded on a semi open, well-used trail, one it traveled often and the first one it followed its mother on during the oppressively hot days following its birth in late July a few years before.

Now, after years of avoiding predators, especially two-legged ones, its movements were on autopilot.  There wasn’t going to be anything new or nothing it hadn’t witnessed in the past that would impede its journey.  Pausing occasionally, the buck would carefully select and nibble on the tender regrowth of spineless kidneywood, occasionally lowering its head to the ground to obtain a mouthful of protein fortified forbs germinating as a result of a recent rainstorm.  Life was good as the resilient brush country relinquished forage in abundance, which would not only insure the buck’s survival, but play an integral role in just how large its rack would be by summer’s end.  Approaching a narrow ranch road, the buck paused momentarily as the clattering sound of a pickup truck interrupted the placid morning.  And as the vehicle came into view, the buck catapulted over the road, pausing just out of sight of the truck.