Browse: Home   /   Are There Unkillable Bucks? 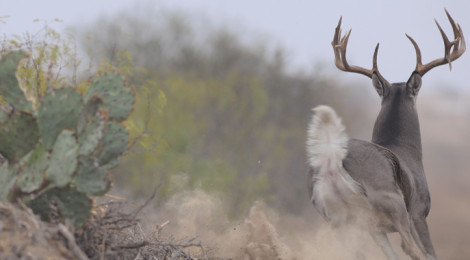 Are There Unkillable Bucks?

TOJ-SG / January 1, 2014 / Comments Off on Are There Unkillable Bucks? / Feature Articles

Wild deer are born with an inherent fear of humans which intensifies by confrontations between the animal and man.

sudden clap of thunder and the startled buck fawn dashed towards its dam, only to discover its mother lying still on the verdant oat patch.  Instinctively, it rammed its head into the doe’s udder until several men approached, and it bounded off, pausing only a short distance away to watch as the hunters carried off its life support system.   Observing this activity would only magnify the fawn’s inherent fear of man as it matured.

One year later, it developed its first set of antlers.  Throughout the long, hot South Texas summer, it bonded with several older bucks that insulated the youngster from the dangers in the wild.  He was so attracted to a five-year-old ten-pointer that his mannerisms mimicked the old monarch.  Following the bachelor group, the youngster learned how to avoid humans by simply regulating its time around human activities.  For example, a rancher customarily refilled a particular cattle trough every three days with range cubes which are highly palatable to deer.   The older bucks would slip in following the rancher’s and cattle’s departure and consume what remained.