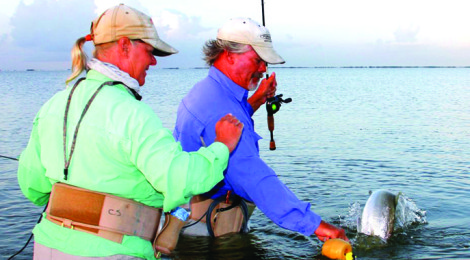 Recent poor public perception of this fabled bay’s trout output is dispelled when compared to the latest scientific data.

Any Texan who targets speckled trout is aware of Baffin Bay’s elite status as an angling destination. Rarely is this high ranking disputed. And recent biological surveys indicate the title is not in jeopardy, despite rumors.

Folks who accept these as facts would most likely be familiar with Captains Sally and Aubrey Black, a pair of fishing and hunting guides who operate Baffin Bay Rod and Gun Club in Riviera. Anglers within this enterprising couple’s social media reach are aware the lodge, which also was their home, was destroyed by fire last year while they plied home waters.

During the Blacks’ struggle to recover from this personal setback, they also were battling a well-meaning but double-edged campaign with short-term negative consequences for the Blacks but long term positives for their beloved bay. A poor public perception of Baffin Bay’s trout output was emerging, driven by concerns over water quality. This unscientific view threatened to damage the bay’s trophy trout reputation, if only temporarily.

Further cause for concern came from a persistent brown algae bloom and a 2012 die-off of black drum, which sparked a movement to research the problem.

To set the stage, by 2014 the 63-mile Upper Laguna Madre system from Corpus Christi Bay to the south end of the Landcut had endured three years of drought, accompanied by extreme heat and high salinity levels. A couple of minor fish kills followed by a cold snap that stunned sea turtles added to the concerns. In this atmosphere came dubious reports of poor fishing from a handful of individuals, which received more media attention than the 307 trout greater than 25 inches caught in 2013 by the Blacks and their clients.

Above the fray, Texas Parks & Wildlife’s Faye Grubbs, the Upper Laguna Madre program leader, tried to put it all into perspective. TPW records for 2013 showed a modern day high for salt content in Baffin Bay, but a remarkably healthy fishery. Keep in mind, the salinity of the Gulf of Mexico is about 35 parts per thousand. The salt content in Alazan Bay, an offshoot of Baffin Bay, in July 2013 reached 92.5 ppt. Extreme salinity levels can blind fish and negatively impact spawning. But larger fish simply seek more hospitable conditions if they can. Three years earlier those same waters had become completely fresh after several tropical storms hit the Rio Grande Valley. Such extremes remain unprecedented.

Black drum have been known to survive in salinity levels from 0-80 ppt. Redfish in the lagoon have been found in salinity levels from 20-40 ppt and trout have been observed in salinities ranging from zero to 77 ppt.  So the lagoon, however inhospitable, is highly resilient to extremes, as are its inhabitants. But, it seems, there is a breaking point. A nasty bloom of brown tide from 2012, generally considered nontoxic, returned in March 2013. New evidence may indicate high densities of the microscopic organism can kill or inhibit growth in larval fish and mollusks such as clams by choking out other microbes at the base of the food chain.

← Prescribed Fire & Supplemental Feeding
About the May 2015 Cover →