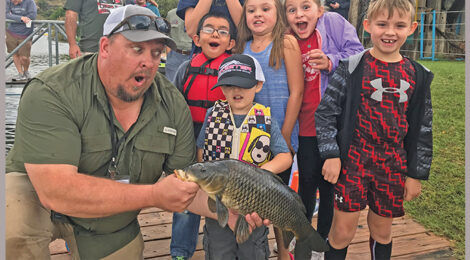 TOJ-RT / January 1, 2023 / Comments Off on CAST for Kids — Catching a Special Thrill / Uncategorized

An organization aimed at making life a bit better and bringing a smile to faces of those whose daily dose of “normal” is way different.

What better way to start off the New Year than with one of those feel good fishing stories built around youngsters? Here’s one founded on a charitable organization aimed at making life a little bit better and bringing a smile to the faces of those whose daily dose of “normal” is way different than most.

Doing good deeds is the name of the game with the CAST for Kids Foundation. Formed in 1991, the kid’s foundation is a national charity with really strong Texas ties. It joins volunteers who love to fish with children who have special needs and disadvantages for a fun day of fishing in the outdoors. Fittingly, CAST is short for for “Catch a Special Thrill.”

Thousands of youngsters benefit from the program every year with the help of guys like Keith Combs. Combs is a life-long angler and a popular Bassmaster Elite Series pro from Huntington who is passionate about introducing others to the sport. He and his wife, Jennifer, are always game when it comes to chipping in for a good cause.

Combs formed a partnership with CAST last fall. As part of the deal, he hosted a fishing event for special needs youths in unison with his 6th Annual Keith Combs Sam Rayburn Slam open bass tournament held back in October on Sam Rayburn.

Additionally, the couple helped organize a banquet/fundraiser benefitting the CAST foundation on the eve of the main derby.

Plenty of youngsters caught a big thrill in the Saturday fishing event with the help of a small army of dedicated volunteers who guided them along bank and took them on boat rides. Some kids traveled from as far as San Antonio to join in the fun.

More importantly, all of them caught fish and earned the opportunity to weigh in on the big stage, Combs said.