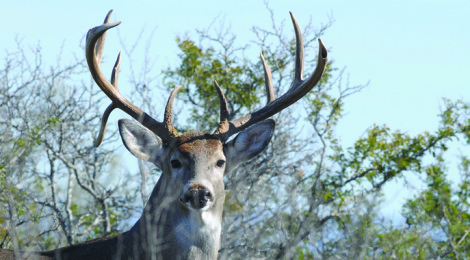 CONTINUE SCOUTING INTO THE SEASON

TOJ-SG / November 1, 2015 / Comments Off on CONTINUE SCOUTING INTO THE SEASON / Feature Articles

Preseason scouting in South Texas continues into the early part of the season with information gathered employed later during the rut when mature bucks are most active.

In spite of the discovery of chronic wasting disease in a deer breeding facility located in Medina County and a trace of anthrax in Uvalde County, deer hunters remain excited about what appears to be a banner hunting season.
The jury is still out, but based on the abundance of spring rain that saturated Texas and the copious amount of vegetation left in its wake, there should be some outstanding bucks show up in the harvest. But in order to realize that ultimate hunting experience, a hunter must be prepared.
Since most sportsmen are extremely busy making a living, time is extremely limited when it comes to preseason scouting. But to circumvent this minor glitch, hunters must conduct their scouting activity throughout the first few weeks of the season. That’s right, preseason scouting in South Texas can be performed during November, even early December, and the information can be employed later in the rut when mature bucks are most active.
More importantly, bucks observed early on in the fall remain somewhat predictable. Thus if a desirable buck is located early in the season, there is a good chance that it can be patterned and seen again. This is often not the case during the rut when buck movements are substantial yet unpredictable.
According to a team of scientists from the Caesar Kleberg Wildlife Research Institute, daily movements of bucks in November average slightly less than three miles per day. But in December, buck movements escalate to over five miles per day and in excess of six miles per day during peak rut when they aggressively search for receptive doe.
Under the direction of Dr. David Hewitt, state-of-the-art gps technology was employed to investigate buck movements from November through February, which included the peak rut in South Texas. Following the analysis of 33 of the 60 bucks they collared, a considerably large home range for bucks over the four-month period was recognized, with an average of 2,967 acres covered. But more important than the large home range was the variation in area utilized by individual bucks, which ranged from 332 to 13,648 acres, or 21 square miles. They also discovered that home range decreased as deer aged from yearling to three years of age, while the home range of mature bucks increased.