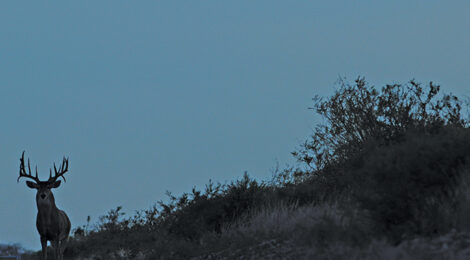 Other than the season opener, nothing on a deer hunter’s calendar generates more excitement than the whitetails’ breeding season.

When it comes to hunting for a mature South Texas buck, there is no time better than December.  Hunting over Thanksgiving is no doubt enjoyable, but only a primer to the adrenalin rush hunters experience in December when those older, larger-racked bucks are on the move.

During the last month of the year, northern skies rupture into purplish-black clouds, tumultuously rushing southward with cold, dank winds inundating the thorn scrub, inciting the most highly anticipated event of the year — the rut.

Other than the season opener, nothing on a deer hunter’s calendar generates more excitement and anticipation than the whitetails’ breeding season as those old, reticent rack-wielding bucks drop their guard in order to satisfy their principal biological function — continuation of the species.

The preliminary stage of the rut in South Texas begins in early December when bucks, supercharged by an increased level of testosterone, morph into four-legged muscle builders with the confidence of a member of the Pittsburgh Steelers’ “Steel Curtain.”