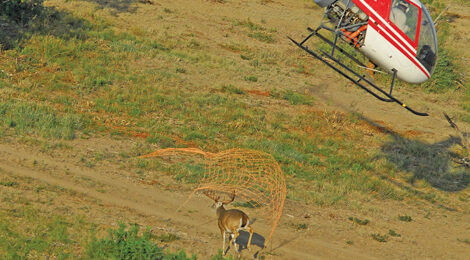 Until missing parts of the whitetail management puzzle are uncovered they will remain the focus of research that begins with their safe capture.

The whirring of a helicopter could be heard in the distance.  As it became louder, 15 wildlife management students spaced along a 1,000 foot long net stretched out like a clothesline on a bladed sendero, hid in the thorn scrub awaiting the deer being hazed towards them.

Temporarily blinded by the dust cloud generated by the blades of the helicopter almost overhead of the capture crew, a buck with a substantial set of headgear slammed head-on into the net, dislodging the poles and becoming temporarily entangled.  Students closest to the animal pounced on it to prevent it from escaping and more importantly harming itself.

Once restrained, the animal was aged and scored while an expandable radio collar was placed around its neck before it was released.  The capture was the initial phase of a study conducted by Dr. Steve Demarais, then from Texas Tech, and myself to learn more about mature bucks.

The study took place on a 107,000 acre conventionally fenced ranch I managed back in 1987 in the core of the Golden Triangle and those assisting in the capture were Texas Tech wildlife students along with ranch staff.  It was an exciting time for us as we were applying cutting edge techniques to capture mature bucks to learn more about the animals we managed.

Methods biologists employ to capture deer have changed as much as cell phones, but all capture techniques have played a vital role in the history of wildlife management.