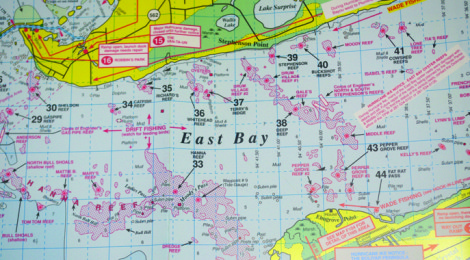 Oyster and clam shell reefs are prime, summertime structure for fish to feed around.
Story and photography by Nate Skinner

Shell reefs are scattered across the bottom of our Texas bays, and make up one the most predominant forms of structure that fish feed from, especially during the summer. Due to regular freshwater influx, the Upper Texas Coast contains some of the largest and most dense concentration of reefs, as oysters and clams thrive in an estuarine environment where salinities do not surpass moderate levels. These reefs are unlike any other form of structure, in that they are a community of many living organisms that are constantly evolving, changing, and growing along the estuary floor. As a result, everything seems to be drawn to these shell structures including gamefish and the baitfish they pursue.
Many of these reefs have been charted over the years and their general location is public knowledge — it’s no secret these areas hold tons of feeding fish. However, knowing the general location of a reef, and understanding how it lays out on the bottom as well as how fish are going to feed around it, are two completely different things. Anyone with access to the internet, a chart, or a marine GPS can find these areas, but there’s more to catching fish here than just simply dropping anchor over some shell and casting a line.
Reefs are typically high traffic areas and can draw large weekend crowds, but there is a reason these areas produce quality fish, year after year, despite the fishing pressure. The “living” aspect of these structures keeps them constantly changing and growing. Live shell reefs are continually expanding from their edges as smaller, secondary clusters of shell exist and grow out from the main reef areas. These may be small clumps with only a few inches difference in depth, or large jagged humps of shell that come up a foot or two from the bottom. Anglers that understand how reefs lay out and where changes, such as humps, drop offs, and holes in the shell are located, will catch more fish than the rest of the crowd.