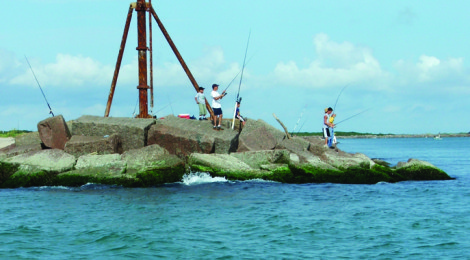 A simple game plan and a variety of live and artificial options will keep anglers on fish.

July ushers in one of the most diverse times of the year for Texas inshore anglers. There are lots of available species and more areas of productive water. But, although there are a lot more variables at play in regards to species, depth, and location, there is no need for a complicated game plan. In fact, being successful during mid-summer is as easy as 1-2-3…
It all starts with location. All three of Texas’ traditional inshore venues will be in play come July. The fact all of these areas will be productive allows fishermen to spread out over a much greater expanse of water than they have been able to during spring. This not only allows anglers to spread out, thus reducing the impact of the summer crowds, but also allows fishermen to enjoy a bit of variety in their angling routine.
Bays – During July, almost every stretch of bay water will be productive at some point during the day. Again, there are plenty of available species – speckled trout, redfish, flounder, sheepshead, and, in some bays, tripletail and/or snook.
Regardless of which species they are targeting, anglers can be productive throughout the entire day if they are willing to shift with the fish as temperatures rise and fall. Essentially, fish will be in shallower water – or nearer the surface in deeper areas – during the cooler portions of the day and will be found progressively deeper as temperatures rise.
Passes & Jetties – Passes which exchange water between the bays and the open Gulf become extremely productive during the summer months. Gulf water is usually cooler than bay water, so fish coming from areas in or near passes will usually be a bit “spunkier” than those in the back bays.
When incoming tides push clean, green water into passes, fish will be in the channel. When outgoing tides drag dirtier, warmer bay water out into the Gulf, fish will be hanging on the outside of the flume of warm dirty water, waiting on whatever prey items are swept out with the current.
Jetties line many of these corridors to the Gulf and are fish attracting structures. Passes lined with jetties offer the greatest variety of fish during summer months – speckled trout, redfish, sheepshead, snook, shark, Spanish mackerel, kingfish, tarpon, and mangrove snapper are among the regular catches for rock hopping fishermen.
Beachfront – The long awaited “green to the beach” conditions begin in July. Ice cream conditions along the beachfront offer not only great speckled trout fishing, but also the opportunity to tangle with Spanish mackerel, pompano, redfish, jack crevalle and other species. Depending on which portion of the Texas coast fishermen are on, they may be able to reach first gut or two from dry sand or they may need to wade a bit to reach these deeper depressions where fish concentrate. Early and late, fish will be found in the first gut, then will move increasingly further offshore as the day wears on.