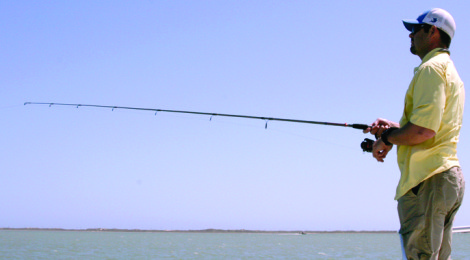 Anglers willing to adapt techniques based on the prevailing conditions, can expect hot action in June.

Most often, the beginning of June feels like mid-summer along the Lower Texas Coast, although the calendar says the year’s hottest season won’t officially begin until near the end of the month. But, thanks to warm spring tides, flats fishermen can jump start summer fishing action on the shallow flats of South Texas.
Along the Lower Texas Coast, most flats begin filling with fish during April. By June, fish are already beginning to inch closer to the deeper channels and holes adjacent to the shallow flats. But, because the midday temperatures in June aren’t near as sweltering as they are in August, fish will be active on these shallow water areas throughout the day during early summer.
Although the temperatures are relatively mild compared to what is yet to come later in the summer, anglers hoping for surface action will still find the most consistent topwater bite early in the day. During the early morning hours, the shallows are sufficiently cool to encourage fish to feed aggressively. Throughout June, “Jr” size topwater plugs work best. On relatively calm days, floater/divers like the Cordell Redfin and Bomber Long A can produce plenty of fish as well. While the topwater bite generally won’t last all day like it might during the fall, the early summer surface action can very well extend late into the morning. And, on overcast days, anglers can often find fish willing to strike surface plugs into the afternoon hours.
Those same calm days that allow floater/divers to be productive can result in good sight casting action on the shallow flats. Usually, just about the time the topwater bite begins to subside, the sun is high enough to allow anglers to target fish beneath the surface. And, on most June days anglers can expect good sight casting conditions from mid-morning on.
There are essentially two types of terrain for sight casting on the shallow flats of South Texas bays — grass flats pocked with sandy potholes and bare sand flats. Both of these type of areas can be productive in June. It is really a matter of which species anglers want to target and whether they want to strictly target sighted fish or mix in “selective blind casting” when specific fish are not sighted.