Blair Schwarz of McAllen caught Toyota ShareLunker 559 from a private lake in Zapata County on February 19.

The fish weighed 14.30 pounds and was caught on a Jackall ASKA squarebill crankbait in about six feet of water. Length and girth were unavailable at the time of writing.

The fish is the twenty-second entry into the ShareLunker program from private waters. The first such was ShareLunker 4, caught by Dan Berg of Hilltop Lakes in 1987.

The largest entry from private waters weighed 15.74 pounds and was caught by Kenneth Morris of San Angelo in 1995. The second-largest private-waters entry was caught by Jesse Roberson of Goldthwaite, then 9 years old. That fish weighed 15.54 pounds and earned Roberson Angler of the Year honors.

ShareLunker 559 is the sixth-largest entry from private waters. The last prior to Schwarz’s fish, ShareLunker 473, was caught by Paul Detwiler of Tyler in 2009. That fish weighed 14.43 pounds.

Anyone legally catching a 13-pound or bigger largemouth bass from Texas waters, public or private, between October 1 and April 30 may submit the fish to the Toyota ShareLunker program.

ShareLunker catches can be reported 24 hours a day, seven days a week during the season, by calling (903) 681-0550. If poor cellphone service prevents use of the voice number, anglers can leave a phone number (including area code) at (888) 784-0600. That number is also monitored 24/7 during the season.

For complete information and rules of the ShareLunker program, tips on caring for big bass and a recap of last year’s season, see www.tpwd.texas.gov/sharelunker. The site also includes a searchable database of all fish entered into the program along with pictures where available. 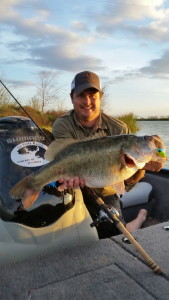