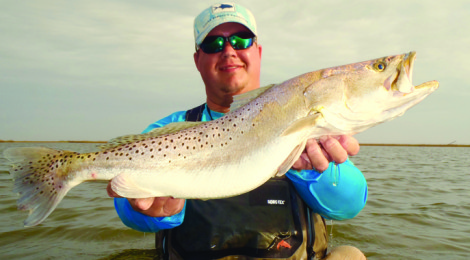 One of Texas Upper Coasts top guides explains why East Matagorda Bay is the perfect location for anglers to target spring trophy trout.
Story and Photography by Nate Skinner

When wade fishing for trophy speckled trout it’s always nice to be surrounded by those whose hands have gripped some downright giants. When the guys walking alongside, thigh deep in the brine, have collectively and consistently caught specks to near double digits year after year, it’s hard not to feel good about targeting wall hangers on purpose.
This was the situation I found myself in while scooting along the south shoreline of East Matagorda Bay under the direction of Captain Trey Prye and joined by his longtime tournament partner and friend, Cutt Ableson. These two anglers had brought many a stud fish to hand over the years and both would add more weight to their long list of big trout on this day.
Their proven success may come from a business like attitude towards the challenge. They were constantly focused on one goal — catching monsters. Trout in the eight pound class and larger were our quarry and every possible step that could be taken to fool one of these giants into striking plastic was considered.
Prye pointed us in the direction we needed to walk. As we bailed out of the boat he instructed us as to where we should encounter depth changes or certain structure where fish should be staging to feed. Once we reached a certain distance from the boat he whistled and gave hand signals to put us on the “X,” similar to a Sergeant assembling and directing his troops for battle. We were armed with plug chunking rods and reels — ready for that one distinct “thump.”